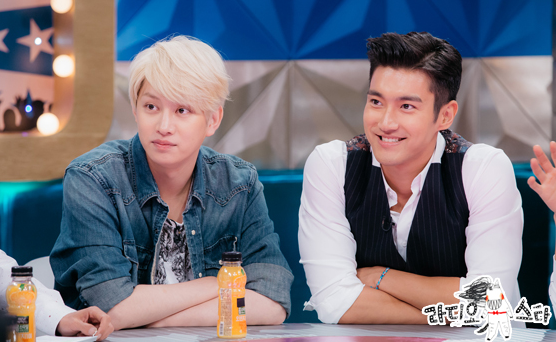 The hit variety show “Radio Star” will be interviewing Super Junior, but this episode reveals a deep seeded secret for the band member Heechul.
The band member came clean when directly asked about the female dynamics of the fashion show “A Style For You” Hara, Bora, and Hani. The quartet has been for some time, hiding a surfacing secret. A secret only two of the four fashion show host knew about. Hiding this secret has finally come to light and the coming out party is airing on ‘Radio Stars’ next episode!

MC Yoon Jong Shin brought up evidence of Heechul’s past with Hara. Heechul still repeats what he has said in the past that he views Hara as a woman. But when directly asked about Hani he had something quite different to say. Hani is a person Heechul confides that he wants to always be by his side.”About Hani, she’s to valuable to see her as a woman.” his compliments didn’t stop there for the young hostest. To get the full scoop of Heechul’s hidden lust for Hani watch the next episode of ‘Radio Star’!