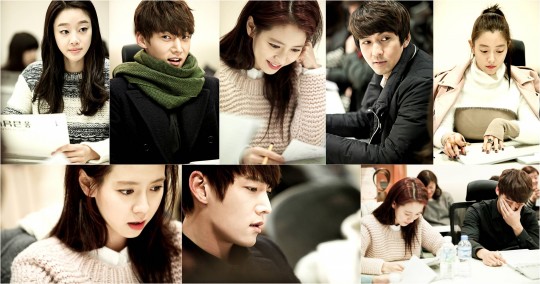 Song Ji Hyo and Choi Jin Hyu posed with holding the screenplay’s of “Emergency Man and Woman”
Song Ji Hyo and Choi Jin Hyu’s posed seen in the picture for releasing script of the “Emergency Man and Woman”. Emergency Man and Woman, is a TvN’s news Saturday/Friday drama which revolves around the adversary couple who divorced 6 years ago. On the drama, Oh Jin Hee and Oh Chang Min are both interns in the hospital, meet at the hospital’s emergency room, fall in love and then their story starts.
At picture, Song Ji Hyo is in casual avatar and looks stunning with her great skin. Choi Jin Hyu also had demonstrated his manliness and successful in magnetizing female fan’s heart.
The picture was released by the drama staff team at the Sangamdong CJE & M Center.