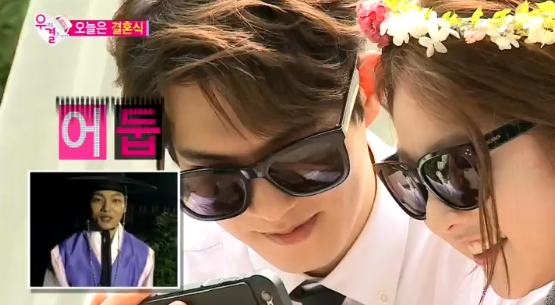 Yeo Jin Goo must deserve couple of good remarks due to his responsibility to backfire message of congratulation to Lee Jong Hyun and his sweetheart Gong Seung Yeon on their marriage ceremony.

On the 11th broadcast of MBC, the couple declared their marriage celebration with grandeur. Lee Jong and Gong Seung were happy to celebrate their wedding ceremony.
Before the celebration of their marriage, Gong Seung Yeon asked her hubby who the right guest was to come to the marriage party. He replied confidently that there was no guy to visit the marriage party. It caused laughter.

However, Gong Seung Yeon didn’t stop speaking. She enquired whether co star Yeo Jin Goo would be lucky to visit the party as a special guest. Yeon’s hubby might be shocked for her curiosity about the coming of Orange Marmalade’s co star to join the marriage party. He felt jealous and he replied frankly that Goo would not be found in the party as this guy had the tight work schedule.

Hiding his feeling of jealousy, he preferred to share a video message in which Goo confirmed his preparation to meet couple soon.

In the video message, Yeo Jin Goo apologized by addressing Gong Seung Yeon as sister-in-law that it was Yeo Jin Goo. At the same time, he expressed his inability to attend the romantic party. The actor also continued by saying that she should take appreciation messages from her hubby as he requested her hubby to accept his cordial message of congratulation in this regard. To end, this actor also congratulated the couple by wishing happy days to shower on these two young sweethearts to enjoy the romantic bliss.