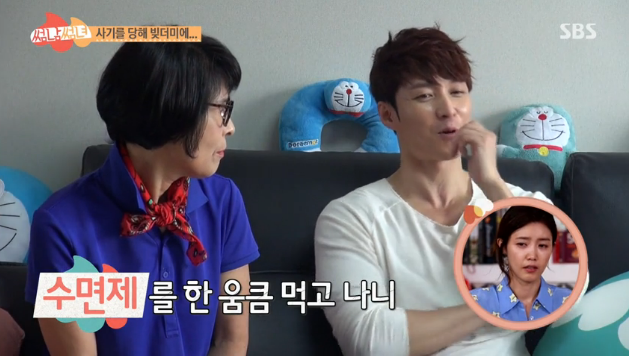 In recent video clip of SBS’s ‘Some Guy Some Girl,’ Seo In Young and Kang Kyun Sung went straight to the residential apartment of Shim Hyung Tak to record the face-to-face interview.

Shim Hyung Tak has had a caustic story to share with these visitors regarding his painful struggle in past. His family members had to bear lot of pain and turmoil due to the sudden financial crunch. They faced the hazardous financial downtime. At that tine, Tak had to find the part time job to manage the debts. He stated that their hard earned money was spent for clearing debts. He further told visitors that he lost his weight due to lack of nutritious food to eat.

Mother of Shim Hyung Tak joined this short conversation. She unearthed her sad story. During the financial crisis, she once thought of committing suicide by consuming powerful sedative pills. However, fortunately, her son traced the suicide note written by his mom before committing suicide.

The actor continued saying that he didn’t appreciate his mom because of her wrong decision. He decided to consume ten sleeping pills on a single go. Later, he rushed to the ER informing them of the intake of ten sleeping pills at a time. His mom told visitors that after reaching hospital, Shim Tak(her son) requested her not to take sedative pills any more to destroy life.

Lastly, both actor and his respected mother started crying silently recollecting hard times in past.

Seo In Young , Shim Hyung Tak , Some Guy Some Girl