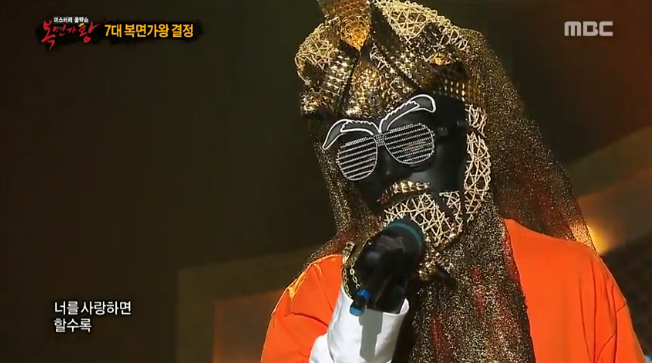 Cleopatra has again worn the crown outperforming her rivals at King of Mask Singer show.

Cleopatra lent her voice in singing Boohwal’s masterpiece song entitled ‘The More I Love You’. This song was aired on MBC. Her sweet voice made the jury spellbound. They selected Cleopatra for her sweet voice. Eventually, she was conferred on the prestigious seventh King of Mask Singer. She won this title four times.

In a statement, Cleopatra rejoiced by expressing that she didn’t think of reaching the final round of the music show as Goo Ra said earlier. She assumed that her mask would be snatched by eliminating her from the final round of the music competition. However, Cleopatra was not under pressure as she took the situation in a carefree manner. She had no stress. She was happy to undergo the whole selection process. She enjoyed lot when she performed at this glittering music show.

Meanwhile, Spica’s Kim Boa had to confirm defeat to Cleopatra in the long run. Her song Romantic Assassin was outperformed by Cleopatra’s song The More I Love You.