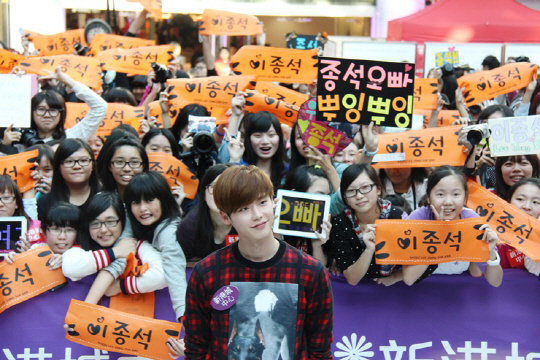 The upcoming hallyu star, Lee Jong Suk, appeared in Hong Kong for his fans and thus gathered more than thousand people who came out to watch him.

His role in the SBS hit drama “I Hear Your Voice” made Lee Jong Suk as one of the hottest rising new stars. He proved it when more than thousand fans welcomed him with lot of excitement, when he appeared for a fan signing event before a shopping mall in Hong Kong on 1st December.

The actor was dressed in red and black checkered shirt marking the holiday season. He kindly signed for his fans and gave them warm hugs and presented them with memorable moments. He kept smiling from the beginning to the end, though he was exhausted by signing for over thousand fans. He stole the hearts of not only his fans but also his staff by taking care of each and every one that day.