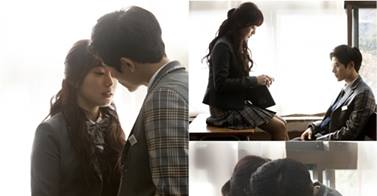 ZE:A’s Dong Jun and Sun Joo’s first kiss scene have been released for the forthcoming web drama Aftereffect where Don Jun shyness played really disturbing role to complete this shots. He seemed to have been nervous for his first kiss scene and took a 10 NGs shots, reported by the Oasis Pictures. The drama which is scheduled to release for Jan 6 is eleven episode long series and will be aired via Naver.

Photos released by the Oasis Pictures on December 30 shows Dong Jun in a school uniform and trying his partner for kiss.

According to report, both appeared to have been very jumpy for this first kissing scene but they really put hard to make the scene perfect and afterwards they seemed to have been embarrassed.

Both actors were happy after the scene and especially Dong Jun appreciated Sun Joo and production team members for setting high-quality ambiance.