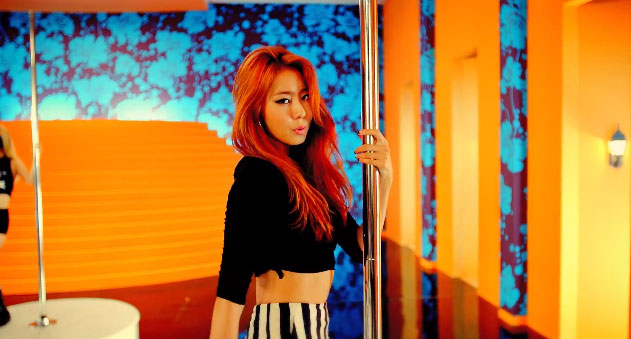 Uee learns Polo dance for her latest drama Golden Rainbow. The stills that have been released recently shows Uee doing a polo dance. In the drama, the Golden Rainbow, Uee plays the role of Baek Won, who is one of the orphans who has bonded into a family. The orphans face many difficulties and grow closer as a family and bond grows stronger.

However some viewers are surprised at the stills and wanted to know why they have displayed the photographs of Uee pole dancing in a Seoul club and wanted to know the future course of the drama’s story. Members of the Golden Rainbow production company assured the viewers that it was not a development in changing her character. Uee first learnt the dance skill to perform with her group After School as part of their “First Love” promotions. Though she had earlier performed the dance, it needed lot of practice. ‘Golden Rainbow’ is telecasted every Saturday and Sunday night.