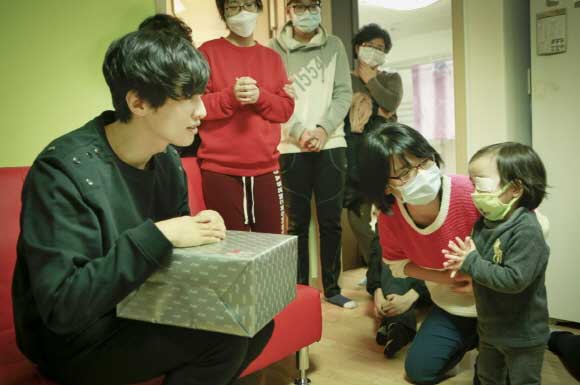 Let us observe the Won Bin next portion of his personality, where he has seen in volunteering at a Korean Childhood Leukemia Foundation to help the children’s with Leukemia. Foundation which was located in Myeongnyun-dong is a pioneer place to serve the children with Leukemia. There he spent a beautiful time with the children and distributed Christmas gifts and cards to encourage them who are not capable to go home due to their illness.

The photos released by Tong Yang Life on December 26, started the ‘Send a Guardian Card’ campaign with ‘Won Bin’s promise’ endorsed by Won Bin to start an encouragement message with those people who are having rough time.
More than, 130,000 guardian cards were sent tackling the initial goal of 100,000 as the response to create opportunities and serve others.