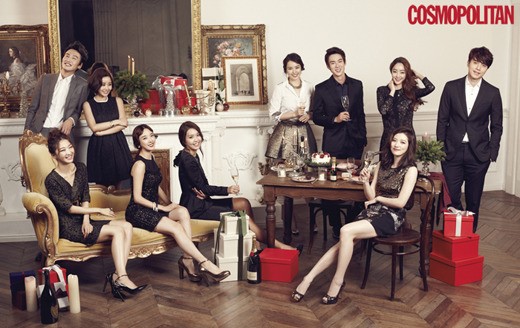 Twenty actors and actress of the King Kong Entertainment were on a shoot for a “family pictorial” for the Cosmopolitan magazine. The pictorial theme was “Christmas House Party”, in which Lee Dong Wook, Sung Yuri, Yoo Yeon Suk, Lee Kwang Soo, Honey Lee and many others participated.

The actress were elegantly dressed up in a simple manner while the actors dressed up in ‘dandy’ fashion. The studio was decorated with Christmas themes including colors of red, gold and green. The staff who attended the shooting noted a very close friendship among the members of King Kong Entertainment and also felt that the pictorial shooting was similar to a real party. Different pictorial snap shots will be available on the Cosmopolitan’s next month issue.