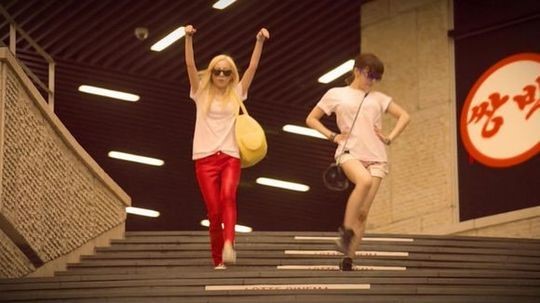 Dara of 2NE1 and Park Bom, AKA Double Park had an impromptu press conference a few days ago. The girls announced a world tour which would include Korea, China, Hong Kong, Taiwan, Singapore, Thailand, Malaysia, and Japan. This would kick off in March 2014.

Aside from that, they have another exciting news! Exactly at  midnight KST on November 21st, they would be releasing their next single titled “I Miss You”. According to Dara, the song is more suited for evenings, hence the reason for the debut release. This is very personal for the girls as they both cried during the recording process.

They have also released teasers that were hard to see. Dara jokingly said that she chose those photos herself because she heard that reporters have really good eyesight. She also made a controversial comment that one member’s outfit did not cost anything. That would certainly spark interest!

To top it off, they also revealed that 2NE1’s Minzy recently finished a solo recording and would be coming out soon.

Stay tuned because we will also feature the teasers that will be released on YG-Life!